We were tasked with producing a summer online campaign, primarily to support their new product launch for Pineapple Flavoured Water.

The campaign would need to be dynamic enough to offer a wider appeal and have longevity as it would be rolled out later in the year to be used across the full range of water flavourings; Orange, Lemon & Lime, Raspberry & Elderflower and Watermelon.

We could not prominently feature food imagery if they were not present within the actual ingredients of a product. For the Pineapple Water Flavouring, this meant that pineapple would have to be shown in a different way, as the pineapple itself was just a flavour – real pineapple was not used in the creation of this product. We did this by featuring pineapple accessories, where the fruit appeared on a pair of glasses, straws, etc.

This key campaign theme needed to be all about being a bright and confident individual; a better version of oneself. 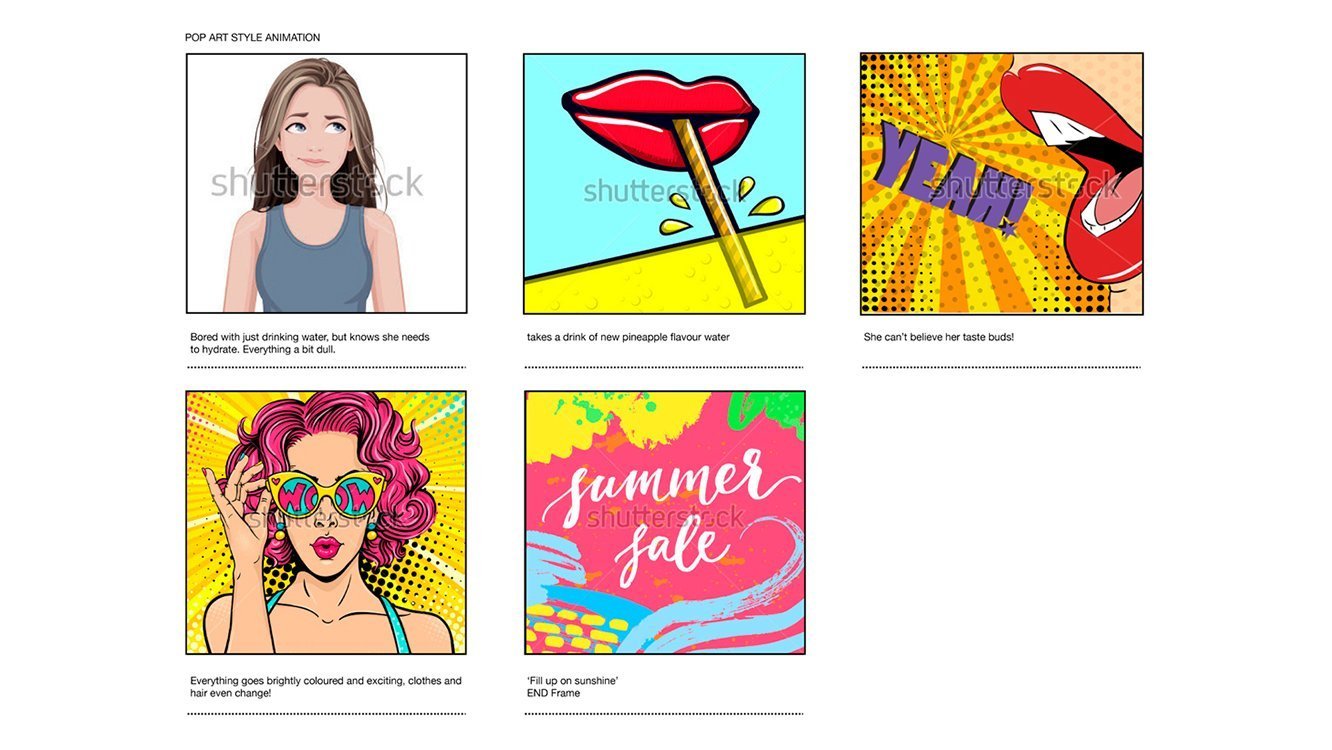 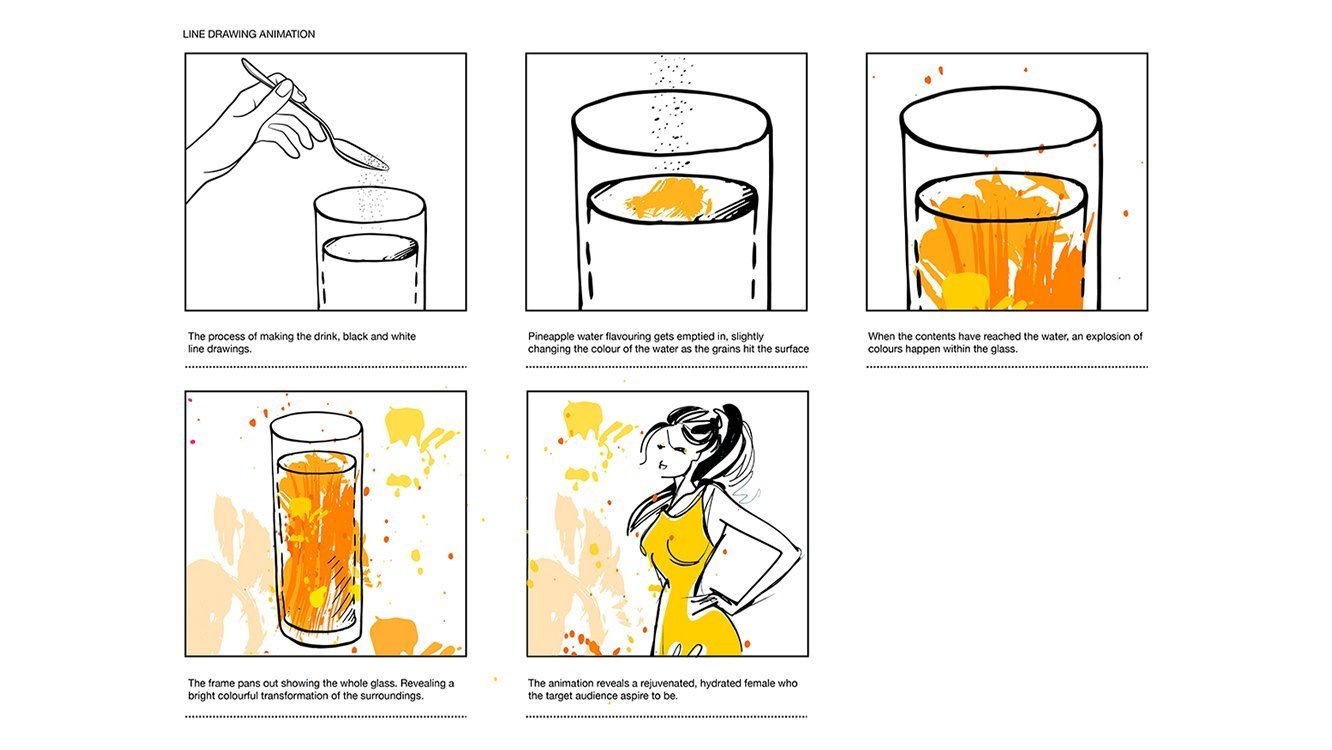 Through a detailed brainstorming session, our Account Managers, Senior Designers and Junior Designers came up with a wide range of potential concepts. After careful consideration of all ideas and by process of elimination, we selected five to move forward with. Storyboards were developed to illustrate each concept, all taking into account animation, colours, illustrations and props, as well as how they would work in different formats.

We were delighted when Cambridge Weight Plan chose our pop-art style graphics and animation; it was a firm favourite here! 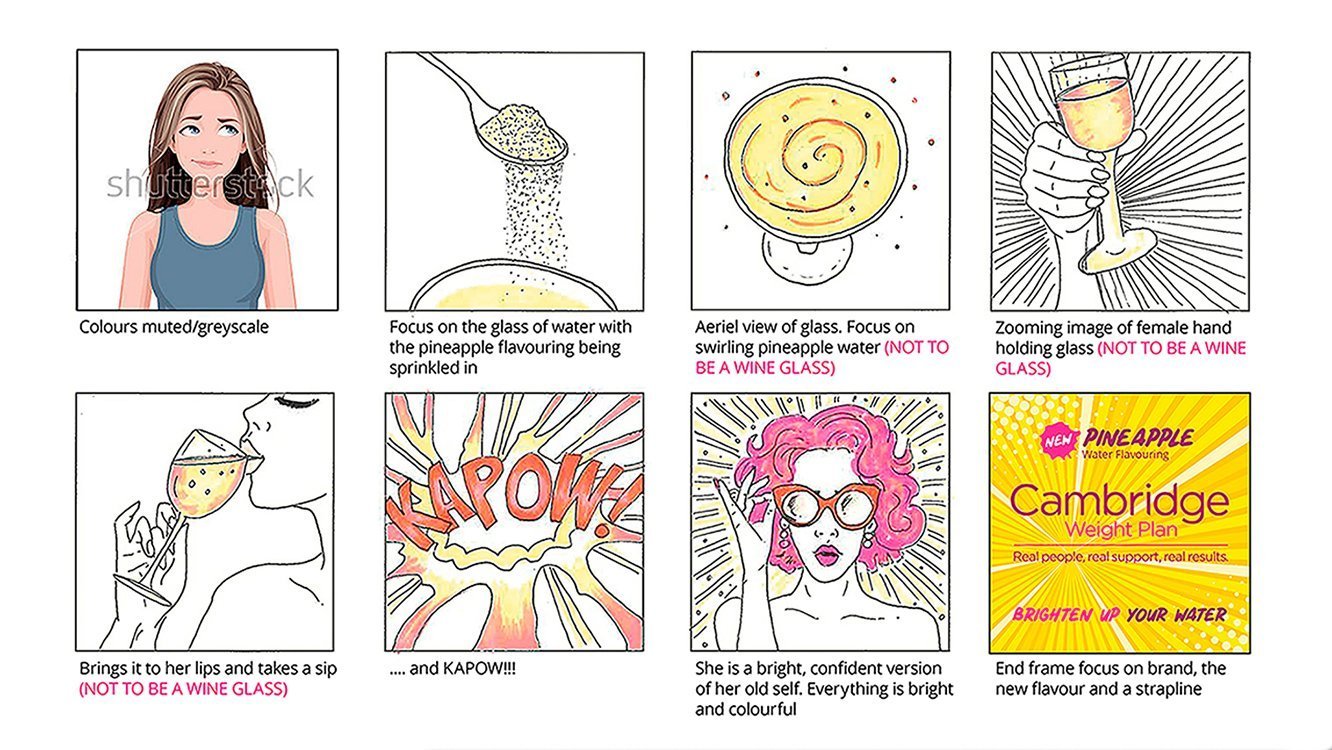 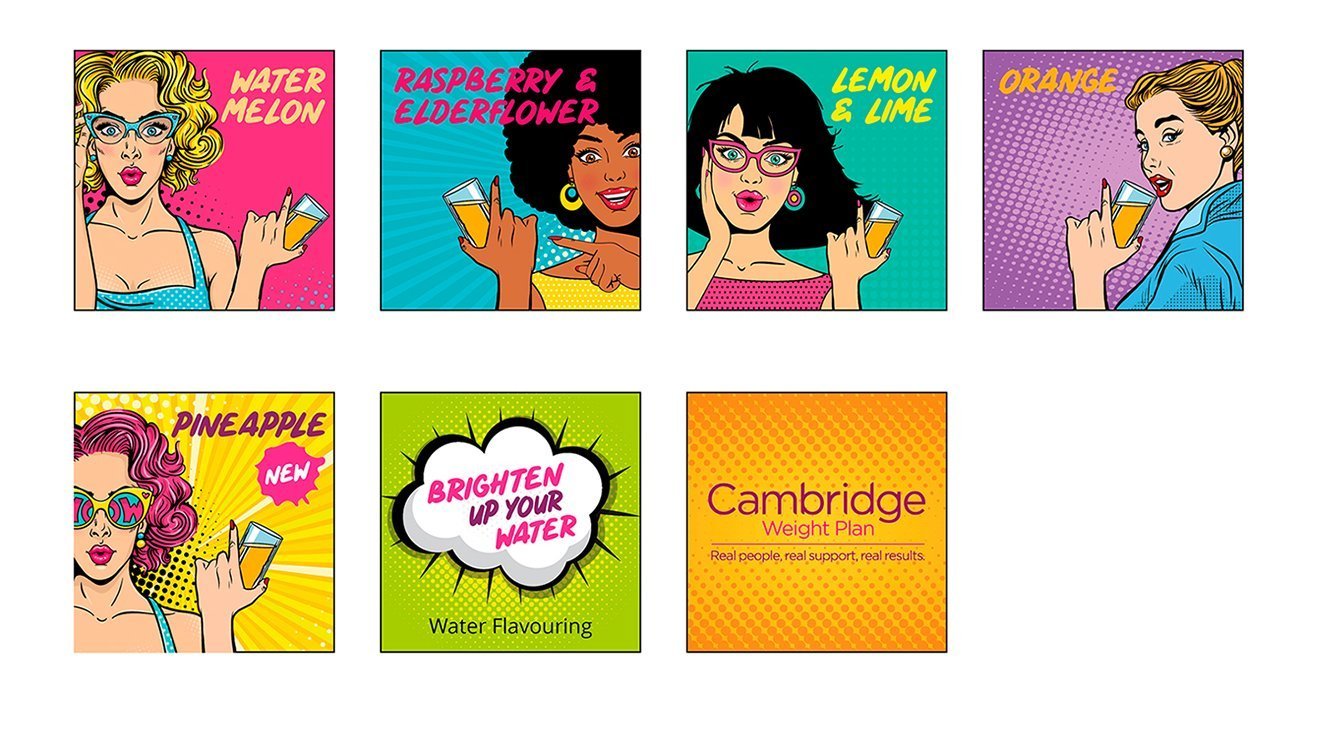 Working closely with the client, we further developed the chosen concept. We presented ideas for potential models, product photography and props, as well as initial concepts for the launch materials, including the video storyboard visuals and online banners.

Cambridge Weight Plan decided to move forward with the illustrated animation presented in our initial concepts, rather than a photography-led freeze frame animation. We therefore produced a refined version of this video concept, introducing some hand drawn scamps to the frames. 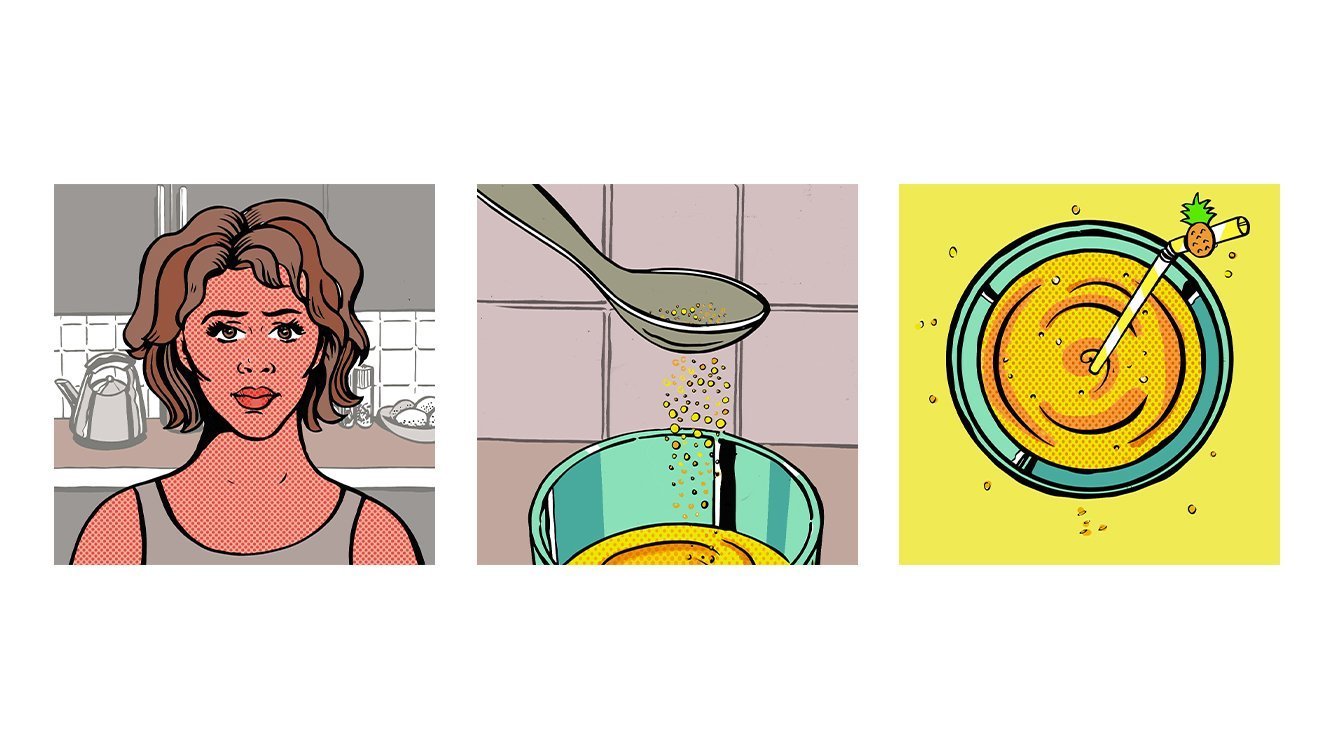 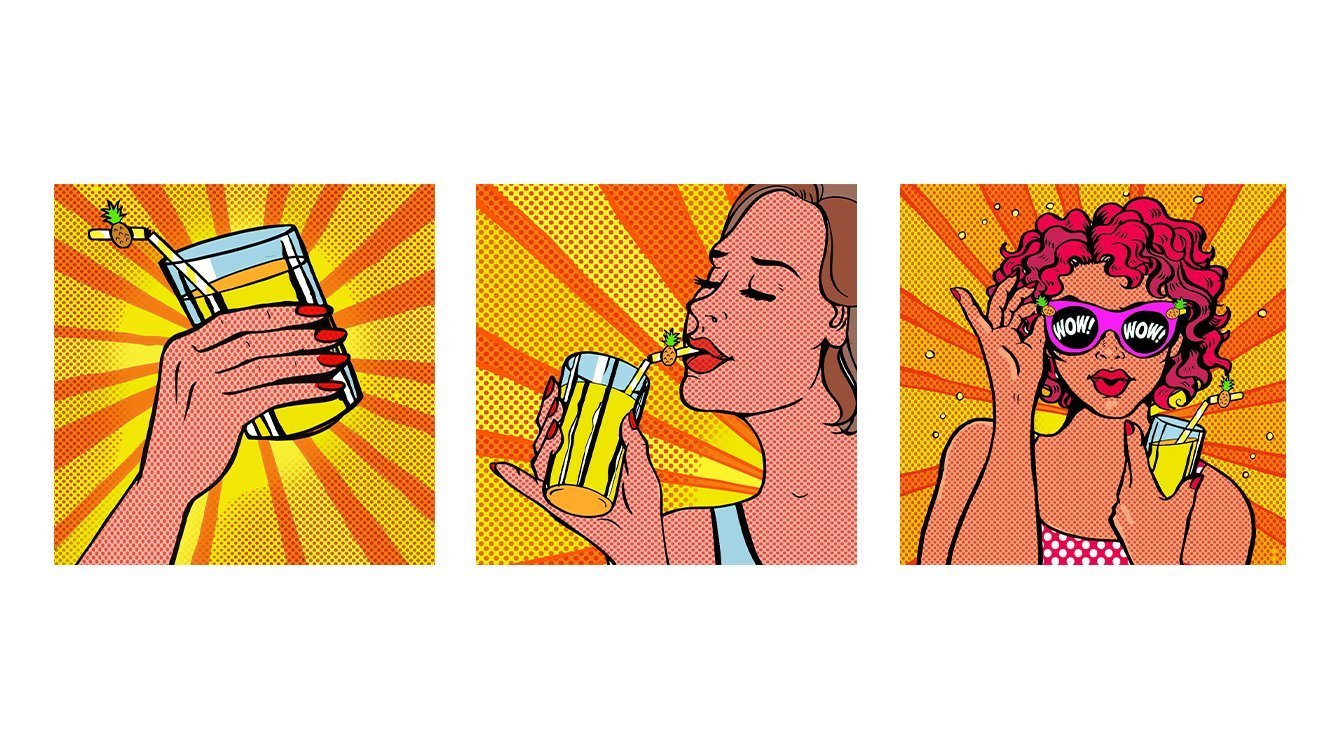 Following our receipt of sign off from Cambridge Weight Plan on the concept, we began work on refining and developing the design for the video.

The creative studio works closely with our skilled production team to create the individual assets which the campaign requires. This means that we produce all of the marketing collateral which is required only to the very highest standards, to full specification, within budget and on time! In this instance we created:

– bespoke illustrations which were to be used across the full campaign
– taking the approved video storyboarding and producing the final video, including background music selection
– web banners
– social media assets

This is one of the most critical steps of the design process for us. At the artworking stage, we ensure that these files are in the correct format, size, specification and are fit for purpose i.e., for printing or web development purposes.

it is so great to see the results of our hard work!

“We really had fun creating this vibrant and positive message for Cambridge Weight Plan. Animation opens up many avenues as a designer to create a theme that is enhanced by movement and music. This pop-art design meant we could really go to town with our Warhol and Lichtenstein inspired styling, ensuring the water flavouring launch went with a real bang!“

take a look at a few of our clients...

To be able to personalise your experience we use cookies.

This website uses cookies so that we can provide you with the best user experience possible. Cookie information is stored in your browser and performs functions such as recognising you when you return to our website and helping our team to understand which sections of the website you find most interesting and useful.

Your privacy is very important to Artisan Creative. If you use a form to get in touch with us, we’ll collect your personal information so we may respond. We won’t pass your details on to anybody else. We also record details of the pages on our website that you visit and areas of the page you interact with. But that data is anonymous. We don’t associate it to your personal profile.

Necessary Always Enabled
Necessary cookies are absolutely essential for the website to function properly. This category only includes cookies that ensures basic functionalities and security features of the website. These cookies do not store any personal information.
Non-necessary
This website uses Google Analytics to collect anonymous information such as the number of visitors to the site, and the most popular pages. Keeping this cookie enabled helps us to improve our website.
SAVE & ACCEPT